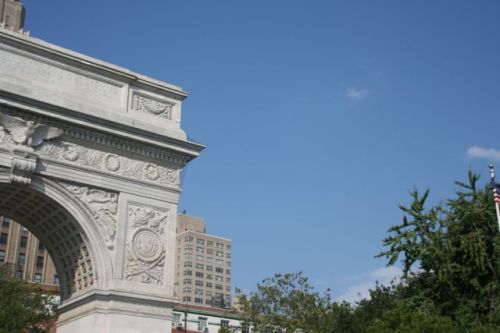 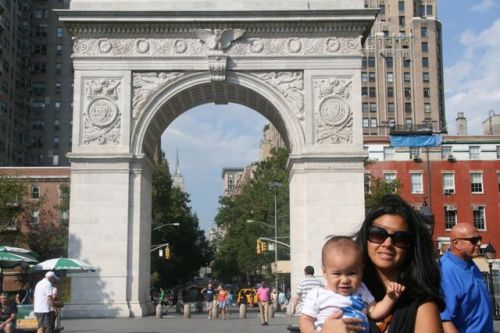 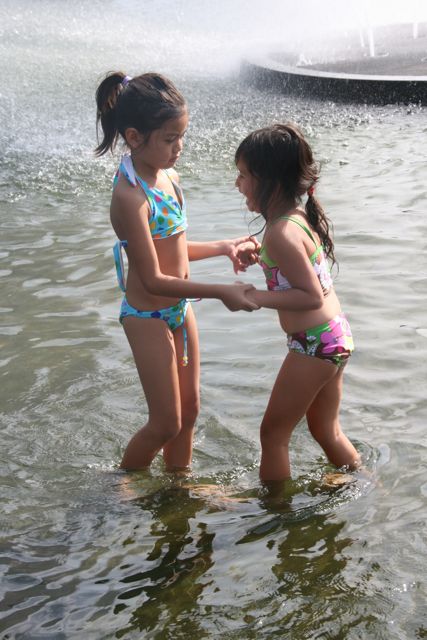 Some dancin' in the fountain. 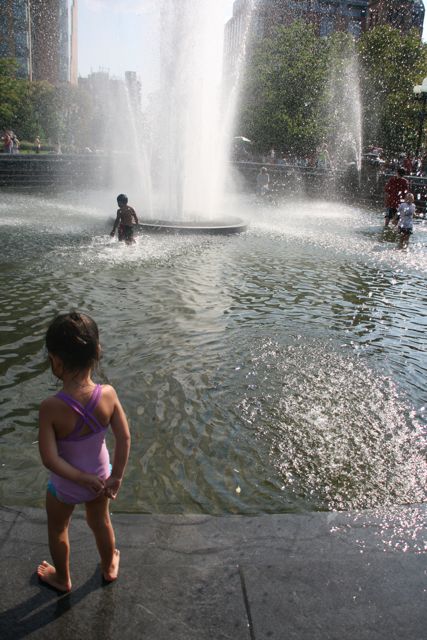 #4 unsure and tentative about this whole fountain thing. 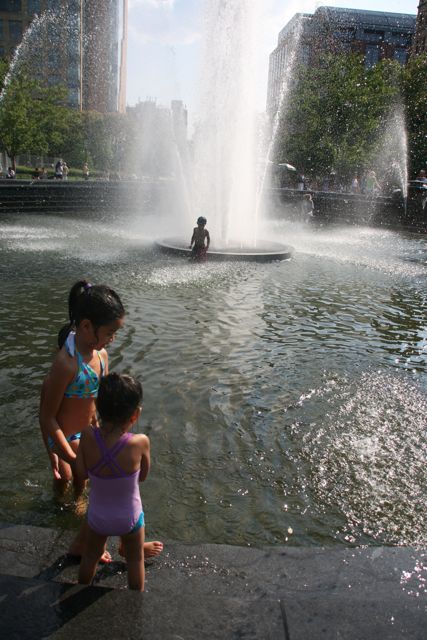 Sister to the rescue. #2: "Don't worry...I know it feels weird..we'll scrub our feet in the bath later when we get back!"

Washington Square was a hit again.  So much so that the kids did not want to leave particularly because other people decided to join them in the fountain and they also began performing public services for the NYC park staff: 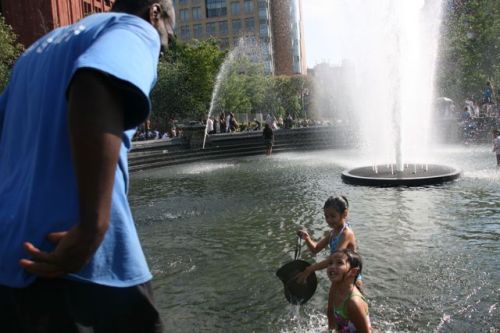 #2 fulfilling the request of a park staffer to fill his hat with water.

Ever-Patient took off with Mr. Cranky-Boy-Pants (which is how I will be referring to #5 for the rest of this post and which is different than Ms. Cranky-Pants who is #4’s name between the hours of 3pm and 7pm when she doesn’t have a nap) and they went to find a good hit of espresso.  The kids finally exited the fountain.  While #2 insisted I cover her with a towel as she changed to her clothes, compulsively checking to see if the towel was being held tight enough that no one could see her change, I looked over to see #3 in her birthday suit trying to figure out which way her underwear goes.  We all stare at her and she says, “What? I still have trouble figuring out which way is the front.”  #2 , horrified, quickly changes and pleads, “Mama, please cover her!”

Notice how #2 is covering up even though she's in her swimsuit.

#1 was not down with the wading. She decided to people-watch instead. She especially enjoyed the acrobatic hacky-sackers.

Another “don’t”:  Don’t arrive at Washington Square at 4:30pm and make dinner reservations for 5:30pm at an amazing restaurant in the East Village.  It was 5:05 by the time they changed and Ever-Patient still hadn’t returned with Mr. Cranky-Boy-Pants from the coffee run.  We ended up meeting the boys at the tiny playground for the wee wee ones at the other end of the square.  This playground is about 1/5 the size of the one they were expecting to run around in but it was good enough for #4 and #5: 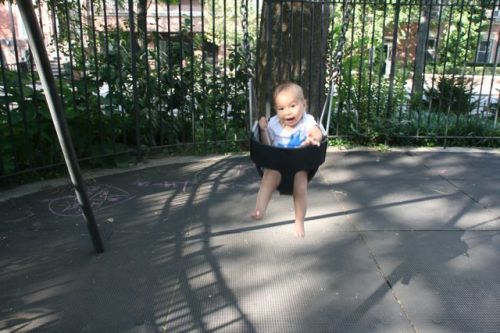 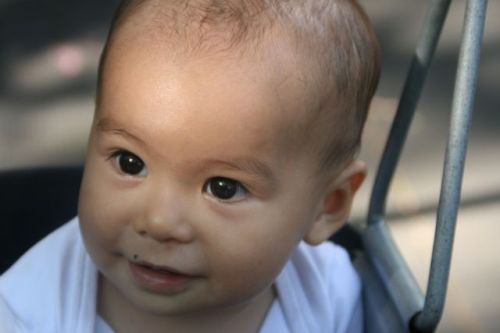 A brief hiatus from crank mode.

#4 swinging next to her bro.

#2 and her temporarily wavy (and mildly crunchy) hair. Let's just say we spent a lot of time in the bathtub that night.

#3 happy to be alive as always. 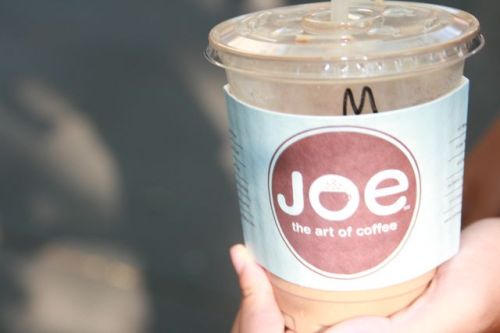 A much-needed iced coffee for mama.

We had to cut short the playground bliss at 5:15 since we had to get to the restaurant for the early seating and before #4 held her own crank fest.  After many “How much longer?” and “My feet hurt!” type of exclamations, we made it there.  It helped that the streets were numbered and we could do a countdown to our destination: “Ok this is 3rd street and we have to get to 1st street, so how many more?”  Dirt Candy is a small and wonderful vegetarian restaurant in the East Village.  When I say small, I mean so small that our little family of 7 takes up 1/3 of the restaurant.  I have to admit that my heart did skip a beat or two as the kids clambered into their seats for a couple of reasons: 1) They’re tired.  When they’re tired, they don’t do well in small spaces particularly when they’re sitting next to each other – this is the main reason why we leave for road trips in the middle of the night.  2) It’s all vegetarian.  Although they fared very well during our vegetarian month, I’m never sure how they will react when confronted with adventurous cuisine.  Everything we ordered was absolutely amazing – the kids especially loved the jalapeno hush puppies with maple butter (#4 licked the butter dish) and the corn grits.  The kids were awesome.  Although they didn’t love everything, I was ecstatic that they tried everything.  The greatest part was knowing that we ingested high-quality and healthy food.  In the end, we skipped dessert because we were definitely pushing our luck with Mr. Cranky-Boy-Pants who sucked on a bread crust half the time and who sat with me on a nearby stoop outside the restaurant for the other half. 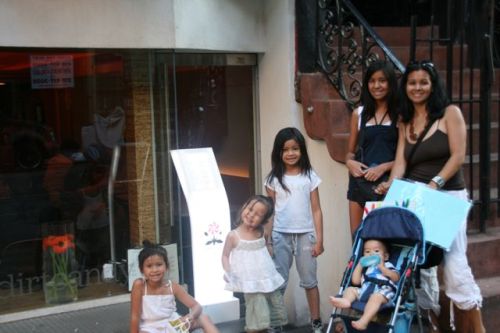 Dirt Candy...and the stoop I sat on. 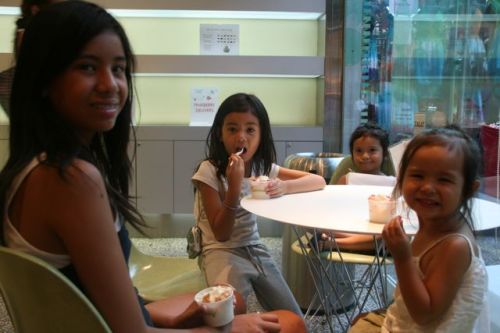 Dessert at a nearby Pinkberry.

Another “don’t”:  Don’t leave a nice, clean restaurant without taking the kids to the bathroom.  About 10 blocks into our walk back to Soho, #1 has to pee.  So it’s a race to find a Starbucks since they normally don’t expect you to buy anything to use their washrooms.  Once we find one, I make sure that EVERYONE goes to the washroom before we continue on our adventures.

#1 is getting restless and wants to do a little shopping.  Thanks to my dad, each of the kids had a little bit of spending money.  By the time we get back to Soho, it’s already 8:30pm and we really only have time to hit one store.  We hit Uniqlo since we don’t have one here, the prices are affordable, the sizing is Japanese (which will fit #1’s super lanky-thin frame), and there are tons of staple clothing for #1 to stock up on.  While #1 is shopping, #2 is pulling many dresses off the rack for me to try on – she’s the best at that since I detest clothes-shopping, #3 and #4 are doing their best not to play hide-and-seek amongst the clothes, and Mr. Cranky-Boy-Pants is climbing all over me trying to gnaw my shoulder off.  #1, #2 (my personal stylist who tells me exactly what does and doesn’t look good on me) and I go to the change rooms.  It’s now about 9:30pm and the kids have been walking around the city for about 10 hours now.  Much to my surprise (and relief), #4 has not crashed and burned yet.  But I notice that she is a bit delirious.  Here’s what took place while the remaining Lopez clan waited outside the change rooms (turn up the volume on this one):

You can tell her degree of tiredness by how disheveled her hair is and how contorted her facial expressions are.  It’s a fine line between CrankyWorld and CrazyWorld.  I’ll take CrazyWorld any day.  (And #3 couldn’t let #4 have all the fun of course.)

Another “don’t”:  Don’t get on a subway train a 10:30pm at night without knowing where it’s going.  We ended up taking a train that was not going to stop at Grand Central Station or come close to it really for that matter.  We had to get off near Times Square and yes…walk to Grand Central Station to catch the EXPRESS train at 11:26pm.  And if we missed this one, we’d have to wait an hour for the next one.  5 super-tired kids?  2 super-super-tired parents? One stroller? One wrap?  Minimal snacks and distractions for the train ride?  Let’s move people… 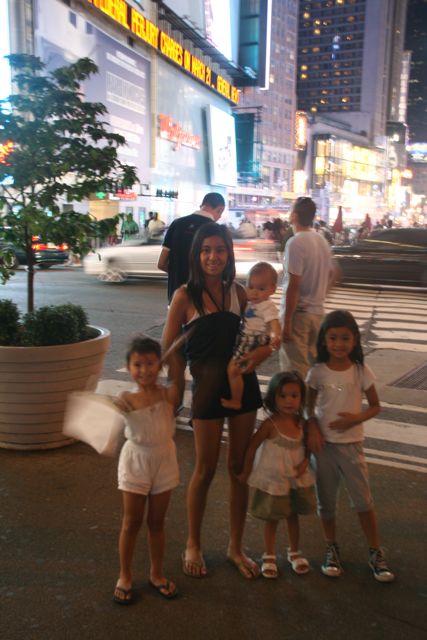 then again...one quick picture with NYC nightlife behind the kids...ok..now let's haul ass!

We made it with time to spare.  But the train ride was another story and another “don’t”:  Don’t ride on a train with only an empty water bottle, a chap stick, and a very expensive camera as possible toys to entertain the kids.  That train ride was LOOOOONG.  I stood for about 2/3 of it with Mr. Cranky-Boy-Pants doing my walking and swaying thing.  After banging #4’s head with the empty water bottle making himself giggle, he fell asleep eventually….though it was only when the doors opened for us to disembark.  #3 alternated between laughing and crying hysterically during the ride.  #4 kept asking for snacks as she licked the inside of the popcorn snack bag we had brought.  I know, I know…crazy rave dancing and the munchies?  I swear she’s clean.  #1 tried to sleep but kept being awakened by a bored #2 and a camera flash.

The kids woke up the next morning begging to go into the city again.  Ever-Patient and I looked at each other and I said, “Maybe we should find a nice Target nearby today and spend time with your new cousins or hit a nice air-conditioned mall!”  They frowned and then I said, “Then we can have an early family movie night!”  There was a collective “Yay!” and they were happy with the new plan.  Thank God my kids are easy…except for Mr. Cranky-Pants who came down with a mild fever that lasted on-and-off for the remainder of the trip.

The kids were treated to some books by Ever-Patient’s cousins – a tradition they started 2 years ago.  We are so grateful for their generosity and their efforts to remain close to us and the kids.  We spent our last day with family – at brunch with Auntie Jac thanking her for her hospitality and ultra-fluffy towels, and at the baptism (and after-party) of their newest cousin.

The kids and Auntie Jac. 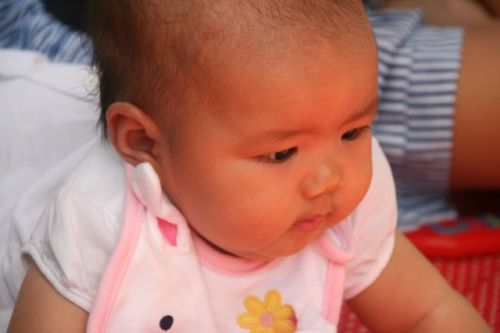 #4, #3, and another little cousin who hails from Frisco.

Mr. Cranky-Boy-Pants and his "What the eff are you looking at?" face.

We headed home right after the party.  For more details about the ride home, read this post.  We got home at 3:30am and the kids were sound asleep for the last leg of the trip.  Why were we in such a rush to get home?  #2 was starting art camp Monday morning.  The last “don’t”:  If your family is like our family and tend to take a lot of last minute road trips to NYC, don’t schedule any summer camps for the kids.

I know you want to see this again…go ahead and pump up the volume (and take a look at her new shoes…and if you ever see her wearing them, do me a favour and compliment her on them – she frowned for an entire day when no one commented on her new shoes)…

This entry was posted in family life. Bookmark the permalink.